Posted by johnarthur12 on April 7, 2018
Posted in: Uncategorized. Leave a comment 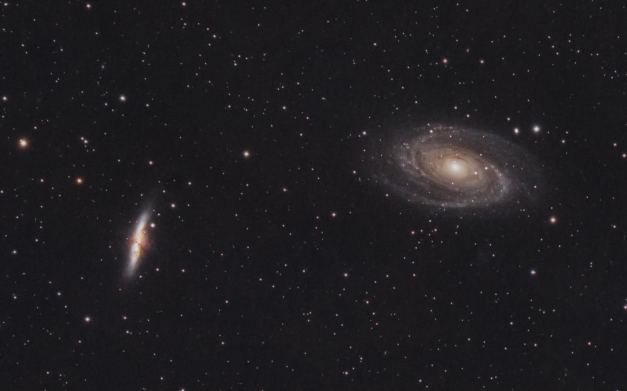 M81 is a large spiral galaxy in Ursa Major that is reasonably local to us at 12 million light years. Its companion, M82 has been disrupted by an encounter with M81 in the past.

M82 is a starburst galaxy with intense star formation triggered by the gravitational influence of M81. The red fan-like filaments at right angles to the axis of the galaxy are formed by a “superwind”. The intense star formation has resulted in multiple supernovae explosions occurring about once every 10 years – the explosions power the super wind. The filaments are expanding outwards at about 600 miles a second and glow brightly in hydrogen alpha (red). They are also a very strong source of radio emission, listed as 3C 231 in the 3rd Cambridge catalogue of radio sources.

I tried imaging the last supernova in M82- SN 2014J (Class 1a) in 2014 when I was just starting astrophotography. I think I just used a single 30 second exposure on a 300mm lens – not convinced I caught anything!

A very, very faint patch of blue between 3 triangular stars under M81 is Holmberg IX – a small irregular dwarf galaxy under the gravitational influence of M81 – a bit like our Magellanic Clouds.

Sky and Telescope Magazine have some bonus digital content attached to their May 2016 edition that goes deep into M81 and M82 listing zones containing HII zones, SNR and radio/X-ray sources. I can just about pick out some of the main zones they mention at 200% magnification in Photoshop.

M82 contains a faint arrowhead pointing to the superwinds. This is composed of 4 brownish dots – regions A,C,D and E that each contain many Radio and X-ray sources, Massive star clusters and SNRs – these are some of the regions producing the superwinds from frequent massive SN explosions.

Its easier to pick out the listed regions in M81 and I can locate A through to G. A to D are bright HII regions. Eand F are listed as containing star cluster/globular cluster – somewhat humbling to be able to detect star clusters or globular clusters around a distant galaxy from a small backyard scope. 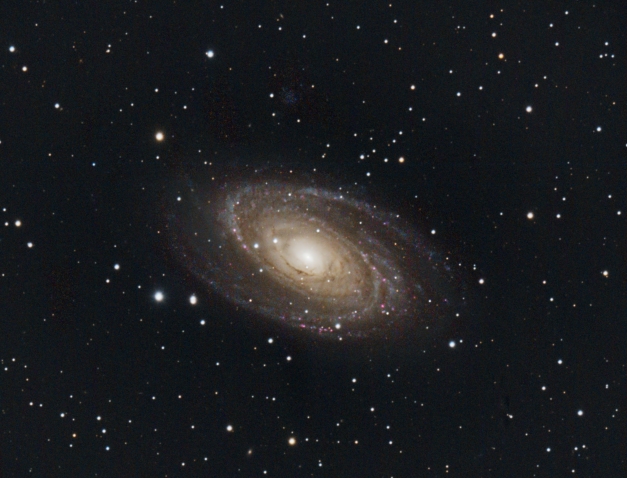 M81 is a “grand design” spiral galaxy and shows a fine mixture of bright core with mature yellow stars near the centre, dust lanes and blue spiral arms full of massive O and B-class stars and bright zones where stars have formed in dense clouds of hydrogen that fluoresce red-pink in the intense ultra-violet light given off by the stars.

In the foreground, some of the dust lanes seem to rise up more vertically – probably due to interaction with nearby galaxy M82.

A small irregular dwarf galaxy that is under M81’s gravitational influence is seen above the disk – Holmberg IX.. 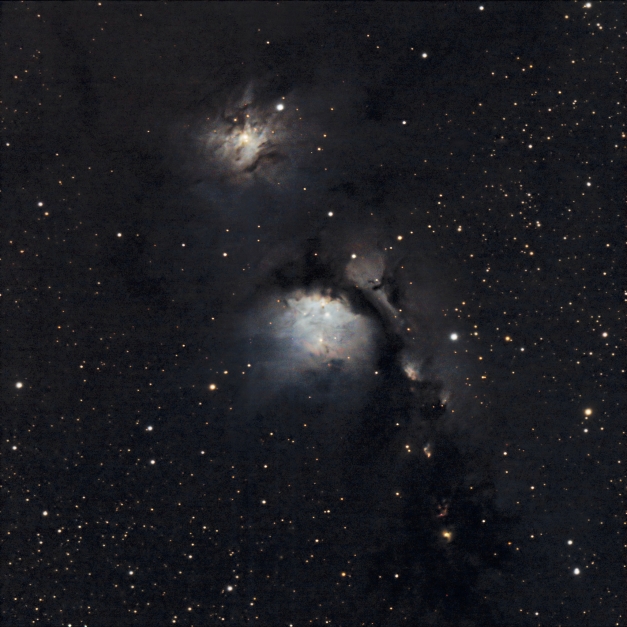 This is part of the huge Orion molecular cloud of dust and gas which acts as a stellar nursery.Theres no getting away from the fact that most of the stars in this image are brown! – due to overlying dust.

In the centre of the image, two young B-class stars (HD 38563A and HD 38563B) are reflected in the surrounding gas with an overlying dark arch.

Towards upper left is another reflection nebula, NGC 2071.

Towards the lower right, some early stars are just managing to penetrate the darkness as red or yellow splotches. One of these splotches (triangular – just to right of two small stars) brightened considerably in 2004 – its thought a young star ignited at that time – the region is called McNeil’s nebula after the amateur who noticed it.

Infra-red imaging shows about 45 new stars in the early phases of development in this cloud (T-tauri stars or Herbig-Haro objects which are outflow jets from young forming stars).

Image acquired remotely from the Mayhill observatory in New Mexico.

Post-processing in PixInsight and Photoshop CC. 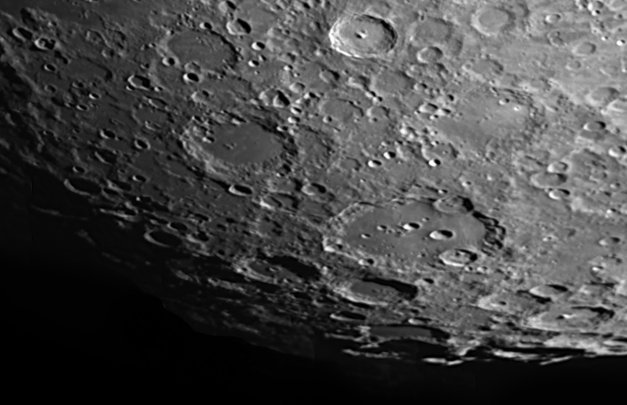 Lower centre:
Clavius: many sub-craters – the whole basin is about the size of Northern Ireland!
Smallest sub-crater is about 4 miles across.

Above and to left:
Longomontanus: nicely terraced crater

Have now solved some technical problems – can do 3000 frame video (about 10 gig) on external hard drive after changing how drive is formatted.

Have moved away from using linked wavelets in Registax 6 which gives much more flexibility in terms of sharpening an image – more to work with before it looks over-sharpened.

Next stage – try a 1.6 x Barlow magnifying lens – that should bring the focal length up to about 3200mm!

Horsehead nebula and the Burning Bush The bright Orion belt star, Alnitak (O class), lies to the left (you can just see that it has a companion – B class).

To the right is Barnard 33 – the Horsehead dark nebula – dense, cold dust and gas backlit by a cloud of glowing hydrogen gas (IC 434).

Go left and downwards from B33 and there are two dust/gas cloud reflection nebulae lit by bright stars. The larger one is NGC 2023.The smaller is IC 435.

My first attempt at boosting saturation on a lunar image to enhance colour. The source image was a single DSLR image taken at the start of the Sept 2015 TLE. with a 900mm f/7.5 scope.

The boosting technique involves multiple saturation layers in Photoshop and can be found at The AstroShake’s website: http://www.astroshake.com

Its mostly the lava that enhances in the Mare regions. The ancient highland rock remains grey.

Blue is Titanium rich rock (mostly in Sea of Tranquility).

The mineral there was named ARMALCOLite after ARMstrong, ALdrin, COLlins – the astronauts from Apollo 11 whose LEM touched down in the Sea of Tranquility and collected samples.

Being in the Shadow

Total solar eclipse - experience is everything

life through my lens, and in my words

An Amateur Astronomer's Observing Diary from the Welsh Border

"We have lingered long enough on the shores of the cosmic ocean. We are ready at last to set sail for the stars." ~ Carl Sagan